CNN will be airing a special or segment about the Jena Six on Monday.
Posted by Reginald M. at 6:03 PM 8 comments:

I graduated from Jena High School on May 14, 2004. I missed the school for a while, but then got over it. Jena is not the best place to life, but its ok. We have a Super wal-mart, over 14 places to eat for a small town of 3000. But on August 31, 2006, things changed. My friend, who lives in Shreveport, found this, and email it to me. It is very interesting to see the facts laid out like this. I would like to know you opinion/thoughts/comments/etc about this.

RESPONDING TO THE CRISIS IN JENA, LOUISIANA

The Jena Case in Brief

On the morning of September 1, 2006, three nooses dangled from a tree in the High School square in Jena, Louisiana. The day before, at a school assembly, black students had asked the vice principal if they could sit under that tree. 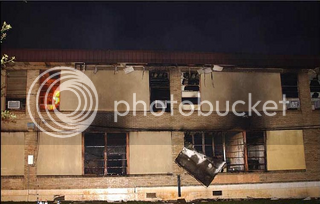 Characterizing the noose incident as an innocent prank, a discipline committee meted out a few days of in-school suspension and declared the matter settled.

At the end of November, the central academic wing of Jena High School was destroyed by fire (the smoke damage is evident in the picture above). Over the weekend, a stream of white-initiated racial violence swept over the tiny community, adding to the trauma and tension. The following Monday, a white student was punched and kicked following a lunch-hour taunting match. Six black athletes were arrested and charged with conspiracy to attempt second-degree murder. If convicted, some defendants are facing sentences of between twenty-five and 100 years in prison without parole.


A survey of relevant events:

The competence and independence of investigators is seriously in doubt .
· There can be little doubt that a white student was assaulted by several black students at Jena High School on December 4, 2006. However, conflicting eye witness statements make it extremely difficult to determine the number of participants or the identity of the alleged assailants with any degree of certainty.
· It is virtually certain that at least one of the alleged assailants was not near the scene of the fight. Most of the students accused of participating in the assault deny involvement.
· The defendants are invariably described as "good kids" by black residents. One of the defendants is a highly respected athlete with a clean disciplinary record who has been repeatedly praised by his coaches as an exemplary student on and off the football field.
· The assault on a black student at the Fair Barn on Friday night and the fight at Jena High School on Monday morning are mirror images. In the first instance, a white twenty-two year-old initiated the fight with a punch to the face of a black seventeen year-old; at the school, a yet unidentified black student initiated the fight with a punch to the face. In both instances, the assailant's friends joined the fray instantly. The striking difference is that the white youth responsible for the Friday incident have not been charged while those allegedly responsible for the school fight are facing charges that could send them to prison for 100 years without parole..
· Although a "bill of information" (based largely on mutually contradictory eye witness accounts) has been filed in connection with these cases, none of the accused has been formally indicted. In the state of Louisiana, only defendants facing the death penalty or life in prison must be indicted.
· In the state of Louisiana, if the victim of an alleged assault is a juvenile, the assailant can be found guilty of attempted second-degree murder even if there was no clear intent to do serious bodily harm. In other words, a seventeen year-old who strikes another seventeen year-old can end up doing fifty years without parole. Any "enhancement" (such as a prior conviction) doubles the penalty.
· An attorney hired to represent two of the defendants was informed by District Judge J. P. Mauffray that he could represent neither because, having interviewed both clients, he had a conflict of interest if one of them should decide to testify for the state. This ruling has been appealed.

The behavior of school officials and school board members reflects a breathtaking insensitivity to the mixture of anger, intimidation and horror inspired by the hate crime of late August.
· The response of school administrators to a flagrant hate crime was radically insufficient. According to The Jena Times, the noose incident was officially characterized as a harmless prank in which white students were merely imitating the actions of cowboy vigilantes in the television mini-series, 'Lonesome Dove' with no intent to intimidate the black students who had expressed a desire to sit under the tree. This construal of the noose incident is so unconvincing that the objectivity of anyone who accepts it must be questioned by any reasonable observer.
· In several statements published in The Jena Times, investigators have insisted that the alleged fight at the High School has no connection to either the November fire or the September noose incident. This statement violates the canons of simple common sense. Indeed, as the teacher's post-fire plea to administrators suggests, the incendiary atmosphere created by the tragic fire and a weekend of white-initiated racial violence made a violent episode at the High School virtually certain. The objectivity and independence of LaSalle Parish investigators would be regarded as suspect by any reasonable person.
· Unambiguous hate crimes call for harsh discipline and an extensive program of sensitivity training for administrators, teachers and the student body. Yet school administrators failed to discuss this or any other serious option.
· Even in the face of heartfelt pleas from black parents, school administrators and the LaSalle Parish School Board refused to discuss the implications of the noose issue.
· This derogation of responsibility would be deeply troubling to any reasonable observer with even a cursory appreciation for the racial history of the region.
· Similarly, school administrators who placed the school on lockdown following the noose incident in September failed to anticipate trouble on December 4, 2006.

The ethical lapses and flawed professional judgment of LaSalle Parish District Attorney Reed Walters call for strong remedial action:
· On September 6, 2006, Mr. Walters made intimidating remarks interpreted by many black students as a suggestion that any illegal acts committed in response to the noose incident would result in a life sentence.
· Mr. Walters' published comments in the December 13, 2006 edition of The Jena Times represent an unambiguous attempt to poison the minds of potential jurors and grand jurors.
· Mr. Walters' decision to increase the charges of defendants involved in the alleged fight at the school to attempted second-degree murder and conspiracy to attempt second-degree murder have transformed a routine school fight into a premeditated gangland hit perpetrated by street thugs intent on murder. This bizarre escalation of charges is impossible to justify on even the most extreme and pro-prosecution interpretation of the meager facts at hand.
· There is strong evidence that Mr. Walters, in his role as counsel for the LaSalle School Board, has been so influenced by the atmosphere of paranoid trauma sweeping the school in the aftermath of (a) the noose incident, (b) the school fire and (c) a weekend of racial violence, that he has lost any remnant of professional objectivity.

Response
Restoring justice to Jena will require the following:
· The Louisiana State Police must be assigned to the investigation of the alleged fight at the school.
· The legal cases cited above must be transferred to an alternative venue.
· A special prosecutor must be assigned to prosecute whatever charges (if any) are deemed appropriate on the basis of an independent state police investigation.
· Judge J.P. Mauffray's capricious decision to bar two defendants from acquiring competent legal counsel is a strong indicator of pro-prosecution bias. In the interest of justice, Judge Mauffray should recuse himself from the cases described above.
· The Civil Rights Division of the United States Department of Justice should launch a full investigation into events in Jena, Louisiana, beginning with the noose incident of August 31, 2006, and culminating in the alleged fight of December 4, 2006 to determine if the civil rights of Jena residents have been violated.
· The inaction of the LaSalle Parish School Board on the noose incident represents a clear violation of Title VI of the Civil Rights Act. Therefore, a written complaint should be filed with the U.S. Department of Justice.
· The LaSalle Parish school system must institute a rigorous program of diversity education beginning in elementary school and continuing through high school with a particular focus on the history of race relations in America and the virtues of pluralism, mutual respect and equal opportunity. In addition, a yearly, system-wide in-service diversity training program must be provided for teachers and administrators.